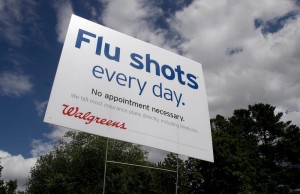 It’s that time of year when you hear about it on the radio and see it on TV.  There are signs that remind you to get it when you drive by.   Friend ask, “Did you get yours?”  It’s the beginning of flu season when every CVS, Walgreens, Rite-Aid, and now Target and Wal-Mart advertise they’ve got this year’s flu shot.

What is the Flu shot?

The flu shot is an annually administered vaccine designed to protect you from the seasonal flu.  It can be given as an intramuscular injection which contains a “dead” virus, or as an intranasal mist containing a “live” virus.

What many people don’t realize is that the seasonal flu shot is different each year and each vaccine contains 3 different strains of the influenza virus.  The 3 virus strains that are chosen are the three influenza viruses that research indicates will be most common during the upcoming season.  However, over the course of the flu season (October to May), many different influenza viruses can circulate at different times and in different places.

How does the Flu shot work?

The flu vaccine, like all vaccines, introduces a known pathogen into the body for the express purpose of creating antibodies against that pathogen.  The presence of antibodies creates future protection against that particular disease.

When a vaccine is administered either a small amount of pathogen, a less virulent version, or a killed version of a pathogen is introduced into the body.  The immune system launches an attack and creates antibodies to destroy what has been introduced to the body in the vaccine.  Because only a small amount, a very weak, or dead form of the pathogen is present, the immune system has (almost) no trouble defeating the intruder and you (almost) never get sick from the vaccine.

Many of the vaccines we receive as either children or adults are for what are known as stable viruses.  This means the DNA or RNA of these viruses changes very little over time.  The more stable the virus, the more effective the vaccine.  The influenza virus, however, is not at all stable.  It can mutate very quickly and can even borrow genetic material from the influenza viruses of different animals, namely pigs and birds.  Yup, you heard me – pigs and birds…that is where the names swine and avian flu come from.  Human, pig and bird flu can easily exchange genetic material because they are so similar.  In places like SouthEast Asia where people, pigs, and birds live in close proximity, these viruses readily exchange genetic information.  These places are also where the seasonal flu is “born”.

But even without the help of pig or bird DNA, the influenza virus will mutate over the course of the flu season.  Often the virus that causes illnesses at the start of the flu season is not genetically identical to the virus causing illness at the end of it.  According to the CDC, the ability of a flu vaccine to protect a person depends on 2 factors:

Get a flu vaccine for the wrong flu virus and its like you’ve received no vaccine at all.  This was exactly the case during the 2003-2004 flu season when the CDC announced that the administered flu vaccine that season had “no or low effectiveness” against influenza or influenza-like illness because it was not a genetic match.

Who gets the Flu shot?

The Centers for Disease Control, the World Health Organization, and pharmacies worldwide would like us to believe that ALL people benefit from the seasonal flu vaccine.  But the following groups are most pressured to get the flu shot:

Unfortunately, in the research available since the first flu shots were administered  in the 1940‘s paints a very different picture.

In a study published in the British Medical Journal, scientists concluded that the effectiveness of annual flu shots has been exaggerated.  In adults research shows that the flu shot does not significantly reduce the number of hospital stays, time off work, or deaths from the flu/ influenza and its complications.  In adults 65 and older, who are most strongly encouraged to get the flu shot, reduced their instances of death due to influenza related complications, namely pneumonia, by 0%. Despite increased vaccination rates research shows NO decline in flu related deaths.  The story is the same when we consider the second most vulnerable population, young children.  In a study published by Cochrane Database of Systematic Reviews states, “A review of 51 studies involving nearly 264,000 children found that inactivated flu shots (the normal seasonal vaccine) were similar in effectiveness to placebos (sugar water) in children under 2.”  In addition, another study claims children who receive the flu vaccine are 3x more likely to be hospitalized for treatment of the flu.

How is the Flu shot made?

The flu virus used to make vaccine is grown in fertilized chicken eggs. This is why anyone with a chicken or egg allergy can not get a flu shot.  During the February before each fall’s flu season, three strains of flu are selected based on the statistic probability they will cause widespread illness.  Fertilized chicken eggs are then inoculated with the three virus strains and vaccines are manufactured.  By the time August comes, vaccines are ready to be distributed, and administered at your local flu clinic for between $15 – $35 per vaccination.

In addition to the 3 virus strains, the flu shot contains many other additives and preservatives including:

The vaccine additive that has gotten the most press is thimerosal, which contains approximately 49 percent ethylmercury, a known neurotoxin.  Both children and fetuses are extremely vulnerable to the effects of thimerosal, yet we encourage our children and pregnant women to get vaccinated.  Studies have indicated that incredibly tiny concentrations of thimerosal induced:

In addition, thimerosal has been implicated as a cause of increased rates of Autism.  As a result it has been removed from many standard pediatric vaccines.  All EXCEPT the annual flu vaccine.  To get a flu vaccine without thimerosal requires an express request as very few of these vaccines are manufactured.

The Flu Shot and YOU

The Flu vaccine, like any other vaccine, is designed to elicit a response from your immune system.  It takes approximately 2 weeks after vaccination to build up immunity to the influenza virus.  During this time you’re not only susceptible to the flu, but because your immune system is busy building anti-flu antibodies, you are more susceptible to other illnesses.  For most people the flu shot does not keep you healthy.  Instead the vaccine weakens your immune system and leaves you vulnerable to colds and flu-like illnesses throughout the flu season.  In fact, the 2 sickest winters I’ve ever spent were the 2 years I got a flu shot.

Guillain-Barré syndrome (GBS) is a rare disorder in which a person’s own immune system causes damage the nerve cells.   GBS can cause muscle weakness and sometimes paralysis. Symptoms may last for a few weeks or several months and though most people recover fully from GBS, some suffer permanent nerve damage.  The connection between influenza vaccinations and GBS began in the 1970s when people who received a swine flu vaccine were  more likely to develop GBS than non vaccinated individuals.

Avoid getting the flu…or any other illness without a vaccine!

It is proven that individuals who live a healthy lifestyle and subsequently have a healthy immune system have a decreased susceptibility to colds and the flu. As an alternative to the flu shot, work on preventing the flu by strengthening your immune system.  There are several things you can do strengthen your immune system and decrease your chances of getting sick with the flu, a cold, or any other illness this winter without having to get a shot.

3 thoughts on “To Flu Shot or Not to Flu Shot?”